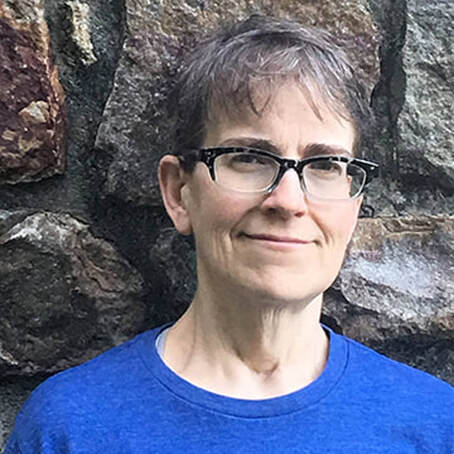 EA Kafkalas is the author of the novels Out of Grief, The Second Heart, Soul Mistakes, and Frankie & Petra, and the plays Lopsided and Pandora's Golden Box.

A true Renaissance woman, she has worked in the theatre as an actor, director, and producer. In addition, EA is a mixed media artist working with clay and acrylics.

She recently moved to a farm in upstate NY and resides with two of her best friends, and her vast library of books, movies, and art supplies. The family dog, Boo, accompanies her on morning walks around the back forty and is happy to be her co-pilot on trips around town. The recent addition to the family menagerie is Boo’s sister, Allie, who likes being petted and receiving hugs.

When EA is not writing about the characters living inside her head, she can be found with her circle of actual friends, who have become her family and greatest support network …

How do you pronounce EA Kafkalas' name?
If you were ever hooked on phonics, this should be easy. The first two letters are her initials, so E. A., and the last name is just as it appears Kaf-kal-as.

When did you start writing?
In high school. I wasn’t the most attractive/popular kid, so it was a form of escape for me. And then I realized that there were all these people living in my head, and I figured as long as they weren’t telling me to build bombs or kill people, I could put their stories down.

Do you base your characters on real people?
In some instances, yes. I think all authors do that to some extent. We draw from past experiences and stories we are told by others, and we create our own words out of those things. I would like to think that we have all known love as well as loss and the full range of emotions.
​
In FRANKIE & PETRA, one of my characters is Greek and from a large family. I am of Greek descent, and while my own family is quite small, I have spent time in and around families with many siblings. I grew up next door to a large Italian family, and recently, I have been taken in by another large family. Both families have treated me as one of their own, so all these experiences bring something to my stories.  I never served in the military but members of my family have. Although my father was a general, he is not the father in THE SECOND HEART, but he did sing that song. If someone that has touched my life sees something of themselves in a character, I hope they will feel honored to have left their mark upon me to the extent that I have written about them.

What do you do when you're not writing?
Read. Paint, sketch or sculpt. Watch movies/TV. Cook (I’m a foodie). And I hang out with some of the nicest people I know, who I am honored to call my friends.

Who are some of your favorite writers?
In no particular order and from the land of the living: Laurie R. King, Anne Patchett, Ellen Hart, Neill Gaimann, David Sedaris, Patricia Briggs, Stephen King, Tess Gerritsen, and Kathryn Forrest, to name a few.

How do you come up with character names?
Characters’ names are always fun for me. I have one of those books parents often buy to help them name their children. Sometimes characters are based on real people, and then, finding a name that reminds me enough of that person is important, but generally, I just enjoy coming up with combinations of names that work well together. I also collect odd and unusual names from a friend that works in a profession where names cross her desk everyday. I'm waiting for the perfect opportunity to use some of those unusual names … you know the kind I mean, the names that kids hate and want to kill their parents for naming them.

Do you ever write sequels? Do you think about that when writing the prior novel?
I've been working on a sequel to Frankie and Petra that would reveal a great deal more about Frankie's origins. And yes, I thought of it at the time I was writing the first novel as I fleshed out the characters. Whether the sequel will make it to market has yet to be seen.

Do you ever get "stuck" when writing? How do you get past it?
Sometimes it's hard to make the muse come … double entendre intended. And yes, I sometimes get stuck, but generally, it's just a matter of pushing through and throwing out the pages that come until you find the pages that work.