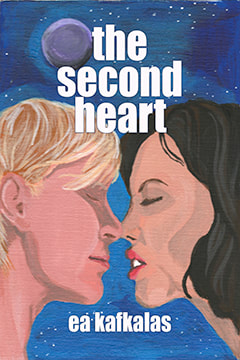 ​Major Kate Winston is a decorated officer with a promising career until she wakes up naked in the arms of a strange woman with no memory of how she got there.

Alexia is from another planet, and she was sent by the elders to kill Major Winston and put off the foreseen destruction of their planet by Earth’s mistakes.

From the backwoods of Pennsylvania to New York City to Alexia’s home world, the novel weaves a tale of emotional intrigue as two women from different worlds struggle with their desires and life and death decisions.

​5 STARS
​Enjoyed this sci-fi love story!!!These characters are so well written they leap from the page. The plot draws you in and keeps you turning pages until the end. I would easily call this a must read for lovers of the sci-fi genre. With it's strong female characters, mix of suspense, wit and romance you won't be able to put it down! --Amazon Customer

​An excerpt from
The Second Heart © 2014 by EA Kafkalas. All rights reserved. No part of this book may be used or reproduced in any manner whatsoever without written permission except in the case of brief quotation embodied in critical articles or reviews.
​
“Keep your friends close, and your enemies closer” — Sung Tze, The Art of War

Kate Winston struggled to rouse herself from unnaturally deep sleep. The scent of lavender aroused memories of better times. She felt the silk of bare skin beneath her own; someone’s fingers danced through her hair. So familiar. Monica? For the first time in over two years, she felt safe.
“You are awake. Thank goodness.”
A strange voice. She bolted to full consciousness while suppressing any physical indication that she felt threatened. Never let them see you squirm. Against a background of paneled walls and shabby curtains was the woman who held her. She had an unearthly beauty and neon blue eyes.
“How do you feel?”
She wasn’t buying the innocent act. She’d be the one to ask the questions. “Where am I?”
“You do not remember what transpired between us?”
“No!” Her head felt woozy; she grabbed the nightstand to maintain her balance. Since Monica, there had been no one.
“There is no need to be agitated. You must rest further.” The woman eased her back onto the bed.
“Look, I can’t be with another woman. It could jeopardize everything I’ve worked for.”
“You mean your military career?”
“You seem to have the advantage here.”
“My name is Alixia.”
“Excuse me? A-lix-ee-a,” she stumbled. We’re going to have to shorten that. “Where are my clothes?”
Alixia pulled the sweat pants and tee-shirt she normally slept in from a chewed up wooden dresser.
How does she have my pajamas? While she could understand the stranger’s allure, she could not fathom going anywhere with someone she had just met—even someone as drop dead gorgeous as Allie.
While trying to put her foot through the pant leg, she collapsed onto an easy chair leaking stuffing. Beneath her feet was dingy orange carpeting.
“Look—Allie, is it? Whatever I said to you last night, I must have had a lot to drink…” I don’t remember drinking. How did I get here?
“You did not partake of any alcoholic beverages.”
“Now you’re just freaking me out. I don’t know who put you up to this or how you got me here.” Hell she didn’t know where here was. “Where are we?”
“A motel room.”
“Obviously, I mean a motel room where?”
“I am not certain the name where.”
“I have got to go.”
“I do not feel that is a wise course of action. I fear you will not make it.”
“Well, you don’t know me at all then.” She yanked the door open and marched out. The cool concrete felt good against her bare feet. Suddenly she was seized by a stabbing pain under her left breast, so strong that it left her breathless. “Jesus, what the—”
Alixia’s hands steadied her. “Come, lie down; you have lost much blood.”
A memory jolted her body. The fight, the beam of light…the wound. She pushed Alixia away and examined her side. She cupped her hand over her side. The last time she’d done that, blood had oozed through her fingers. She lifted her shirt. There was no blood. No stitches, no wound. “You tried to hurt me.” She backed away, trying to get her heart rate under control and grasp what had transpired.
“Shh, quiet. You are still quite weak.” The stranger tried to draw her back into her arms.
“Don’t touch me!” She shoved the stranger away with all the force she had left. Damn the pain, she was getting out of here. She surveyed the parking lot but her car was nowhere in sight. Cab it is. Marching toward the flashing “vacancy” sign, she felt the blacktop dig into her bare feet. Still, she felt things were going to be okay until the sign blurred—as did everything around her. The tailgate of a truck felt cool under her hand as she steadied herself. What the hell was happening to her?
In a flash, the stranger stood before her, completely naked.
“Are you crazy?” Quickly, she scanned the parking lot to see if anyone was watching. “Get back inside now!” She grabbed the stranger and ushered her back inside. The door frame was the closest thing she could find to help support her when the shooting pain started.
“I understand you are frightened.” The stranger opened her hands, palms up.
They were the same hands that cut her—and the same hands that tried to undo the damage. The pounding of her heart slowed. She could feel the warmth as those hands reached for her.
“I know what you are thinking; however, I will not wound you again.”
“How can I be sure?”
Hands gripped her face, forcing Kate to look into her brilliant blue eyes. “I speak the truth.”
The sincerity in her voice was almost convincing. Or was it the warmth radiating from the stranger’s hands?
Removing them allowed Kate to regain her composure. “But you did try to kill me!”
“Yet, I could not do it.”
“Why not?”
“I have grown to care for you.”
“We don’t even know each other.”
“You are not the person they led me to believe you were. I would not have healed you if I believed otherwise.”
“Healed me?”
“You have noted the wound is gone.” Alixia lifted Kate’s shirt and ran her hand over the skin below her ribcage for emphasis.
Kate caught the stranger’s hand in hers. Her touch was enough to make Kate’s hair stand on end. “How?”
“I assure you the procedure is elementary.”
“There's no scar.”
“You would have preferred I left one?”
She studied the stranger carefully. Her skin, like the models on the covers of magazines, was airbrushed of all flaws—she was too perfect. “I've never met anyone like you before.”
“Of that I am certain. We do not frequent your planet.”
Now she was tempted to laugh. “Planet?”
Alixia nodded, “I am from Nemow.”
“Never heard of it.”
“Nemow. It is a small planet, about three galaxies from here.”
“Okay, where are the cameras?”  She surveyed the room. “The joke is over.”
BUY THE BOOK
Actual Book Here