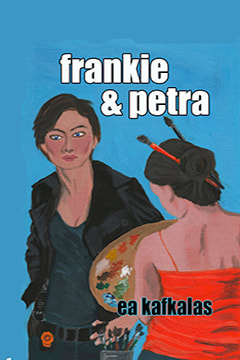 ​Homicide detective Petra Theopholis is good at her job. She closes cases, but her world is turned upside down one morning when she meets a young grad student.

Painter Frankie Martineli has lost everyone she’s ever loved in this world, so she wants nothing to do with someone that puts their life on the line every day.

After a one-night-stand, they go their separate ways.  But when a case draws them together, they find their passions can’t be contained. When fate throws them both into the face of danger, will their love survive?﻿﻿﻿

To hear an excerpt read by the author click here

​5 STARS
​"Great Mediterranean food descriptions, you can taste the spices; experience cultural flavors, feel the emotional connection of the families; and a strong characters making powerful passionate choices. From the beginning of the story, the reader is immersed in atmosphere; deep aromas, clear visuals and visceral action. You care about Frankie and Petra and how life experience both attract and repel them from each other and other relationships.

If you are looking for a well designed mystery within a wealth of sexual tension and release, this s an entertaining story with several surprises. I strongly recommend this writer's work." --T-Valada-Viars

An excerpt from
Frankie & Petra © 2014 by EA Kafkalas. All rights reserved. No part of this book may be used or reproduced in any manner whatsoever without written permission except the case of brief quotation embodied in critical articles or reviews.