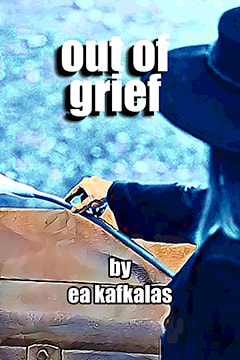 Nikki Kay is a successful lesbian romance author from a loving, Russian family. Her best friend Quinn is from an uptight, Anglo-Saxon family and has been her best friend since childhood. Unfortunately for Nikki, Quinn is more than a best friend—she is the only woman Nikki ever truly loved.

When Quinn’s husband kills himself unexpectedly, Nikki rushes to Quinn’s side. And just as they realize they need each other more than ever Quinn discovers she’s carrying his child. While Quinn sees no problem leaning on Nikki to get her through, Nikki is faced with battling her growing attraction.

5 STARS
​Breathtaking Story!
​Out of Grief by EA Kafkalas is a dramatic and moving love story. Don’t expect a traditional romance story as I did. It all starts out as a lighthearted love story but going further into the story this became so much more, the drama, the concerns and the emotions felt so real. You will find yourself wondering what happens next. The book is a real page turner with fabulous characters you want to console. It just took my breath away. --Julia, Amazon Customer

An excerpt from
Out of Grief © 2016 by EA Kafkalas. All rights reserved. No part of this book may be used or reproduced in any manner whatsoever without written permission except in the case of a brief quotation embodied in critical articles or reviews.

Be careful what you set your heart on,
for it will surely be yours.
~Ralph Waldo Emerson

Chapter One
Quinn lay curled on one side of the bed, practically a blur in the dim lit room—her conservative black dress blended with the dark duvet. I closed the door behind me, blocking out the din of the crowd below. Only those who would stay until the bitter end paying their respects were left now. Her mother had assumed the role of hostess, while her sisters played the cleaning staff.
I shrugged my jacket off, setting it on the rocker by the bed before lying down beside her. Without a word, she pushed herself against me. Instinctively, I wrapped my arms around her waist. Holding her close, I kissed the back of her head, struggling to find the right words. I felt her tremble in my arms as she sobbed.
“Sorry, my plane was late. But I’m here now,” I said.
She snuggled closer, her shoulder blades pressing firmly against my breasts. “I’m glad.”
His scent still lingered on the pillow beneath my head; a combination of Old Spice and cigarettes. It felt wrong to be lying in his spot. A spot he would never lie in again—a spot where he had probably held her, as I was holding her now. Had he thought about the fact he would never hold her again when he put the gun in his mouth? I shuddered at the thought. The idea of never holding her again would have been enough to keep me from pulling the trigger. But if he hadn’t, she wouldn’t be in my arms now, clinging to me like I could tether her to this world.
Resting my head on her shoulder, I smelled her—a mixture of mint and rosemary, from the shampoo she used. A crippling case of writers’ block clogged coherent words from flowing through my lips. The man shot himself in his basement office. A simple, “I’m sorry. I really did love you, but I can’t stay.” were the only words of explanation, offered in the form of a neatly typed note. Clearly he had taken the time to plan it, taken the time to feed the paper into the old manual typewriter and slam each key down. He unlocked the case that held his gun, loaded it, placed it in his mouth, and pulled the trigger—shocking everyone, including my sweet Quinn.
Quinn, who I had known since kindergarten, who had seen me through everything, and was the only woman I ever truly loved. Quinn was the yardstick to which all relationships were measured. So far none had come close. I had tried, several times, to love, but everyone felt threatened by my relationship with my best friend.
I had tried to like him from the start, and he had made it easy. But now I hated him. He had broken my best friend. Hurt the woman I loved. Now, it would be me here to help, to comfort, to mend—only to lose her in the end to another man. Yes, I hated him, and finally I could. But it didn’t feel as good as I had imagined it would, because the price was Quinn’s happiness.
Hours passed before Quinn cried herself to sleep. Anytime I tried to move, she held on, so I stayed until sleep overtook me too.

CURRENTLY ONLY AVAILABLE ON
AMAZON,
iBOOKS and
​BARNES & NOBLE